The history of the Olive and Olive Oil is lost in the mist of time. In Kimi a fossilized olive leaf of European Elea was found dating back 50,000 years. The olive reflects thousands of years of Greek history and tradition, as the tree in its wild form allegedly originated in Greece 12000 BC and was cultivated for the first time, according to history, from the Syrians or the Minoan civilization between 3500-2500 BC.

A. De Candolle in his study “The roots of cultivated plants” and other historical writers consider as the most likely place of origin of the olive tree, the regions of Syria and Asia Minor, whose slopes are overgrown with olive trees. But this element is not considered crucial, because olive trees are found scattered throughout the Mediterranean, on the north coast of Africa, Spain, South Italy, Greece and especially in Turkey. Anagnostopoulos (1951) argued, based on the findings of the excavations at Knossos, that the homeland of the olive is Crete. This assumption is supported by the fact that the name of the tree is Greek and is maintained in all languages. 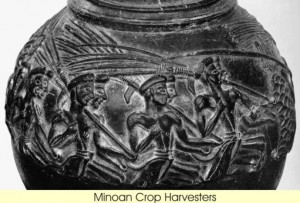 Olive oil or “liquid gold”, according to Homer in antiquity was not just a food, but a symbol of health and strength, medicine and was also a source of magic and wonder. Specifically, in ancient Greece, athletes rubbed it all over their body, in the belief it would give them strength and luck. Warriors anointed it the heads of nobles and threw drops on the bones of dead saints and martyrs, as it was considered an emblem of sanctification and purity.

The olive tree in antiquity

Since prehistoric times, man decided that it was not enough to collect the fruit of wild trees and began systematic production of olives, thus creating the first purposely cultivated olive trees.

This process was long and arduous and allegedly began in Crete, says French researcher Paul Faure. According to Cretan mythology, Cretan goddess Athena, who seems to be related to the Minoan snake goddess, born at the mouth of the river Triton and of course donates the sacred tree to the Minoans. Important in this myth is the reference of a Mistress Athanas on Linear B tablets found at Knossos and shows the connection of the goddess with the prehistoric religion of Crete.

It is clear that the systematic cultivation of olive tree’s contributed greatly to the rapid development of the Minoan civilization, as olive oil was the most important product for export, mainly to Egypt. According to archaeological sources, King Minos and his successors were the first patrons of the sacred olive tree, which allegedly played a key role in the economic prosperity of the Minoan domination. There is impressive detailed evidence on the subject. In a water well in Zakros, Crete, the oldest cultivated table olives were uncovered, dating back 3500 years. At the time they were considered as an offering by a Minoan Priest to the evil gods of the period. Offerings of olives to the gods were widely considered a great religious practice.

Crete until today attracts the attention of all those concerned with the origin and evolution of olives in the Greek and Mediterranean area. Moreover, the abundance of written testimonies from the Minoan period and archaeological findings, found on the island and which related to logistical equipment and procedure for export and storage of oil, utensils of daily use are used to keep the fruits of visual depictions of trees, etc., is so great that rightly maintains great importance in the special sciences. A plate found at Knossos contains vital information about the ancient cult, mentions certain quantities of oil for each holy sanctuary.

During the Classical period, the cultivation of olive tree multiplied. At the time Athens was the financial center of the Greek territory and was considered throughout the ancient world as the “Metropolis of the fruit”, the Athenian state had a strict policy and there was direct state intervention in agricultural economy. Moreover olives for the ancient Athenians were sacred trees and direct descendants of the olive tree planted by Athena herself on the sacred rock of the Acropolis. Respect for these trees was such that it was a criminal offense to cut down or damage an olive tree. 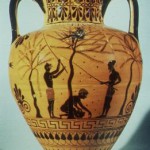 Today, the olive tree is the most important tree crop in our country and Greece is the third largest producer of olive oil worldwide. Cultivation of olives employs about one third of the rural population of the country, and in many areas olive oil is the only income for farmers. In Crete, about ¼ of the island area is covered by olive trees, which constitute 65% of the agricultural land on the island.