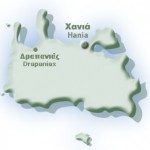 The prefecture of Chania is one of the 4-5 major prefectures producing  olive oil in Greece. Approximately 30 million liters of olive oil a year are produced, 75% of which is “extra virgin”, about 15% is “virgin” and the remaining 10% is “lampante”. The province of Kissamos produces about 14,000 tons of olive oil every year, equivalent to approximately 50% of the total olive oil production of the prefecture. This is due to excellent climatic conditions, but also the irrigation network that has been established over the years.

Drapanias is located 31km west of Chania and 5km east of Kissamos, almost in the middle of the olive tree valley of Kissamos and about 1 km from the beach. It is the largest settlement in the area and was the headquarters of former Kapodistrian municipality “Mithimnis”, during the period 1999 – 2010, when it was abolished with the implementation of the program Kallikratis and was ingergrated into the new municipality of Kissamos.

Apart from the main village, other villages are nearby, such as Pano Drapanias, Fatziana, Nopigia and Kokkino Metochi. The total population of the settlement according to the latest 2011 census is 427 residents. 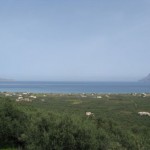 The main occupation of the villagers, as well as those of nearby settlements is taking care of the trees and the production of good quality olive oil. Indeed, because of the great olive oil production in the region, the cultivation of other fruit and vegetables is not widespread and is limited mainly to meet family needs.