extensive settlement of prehistoric and historic times was found 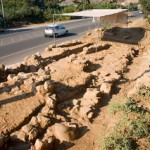 In 1983 during the construction of the Kolimvari – Kissamos highway, near Nopigia at the Troulia hill, an extensive settlement of prehistoric and historic times was found, thus changing the course of the highway. The 25th Archaeological department conducted the salvage excavation research and found that important Minoan settlement had once been established. The 109 sections that were opened in the area of ​​the highway showed that the Minoan civilization was spread over an area of ​​approximately 400m. Simultaneously, prehistoric antiquities had also been identified during the construction of an irrigation network in the cemetery of St. Demetrius Drapania, in the southern part of Troulia hill.

The exploration of certain areas in the path of the highway continues. A clear diachronic archaeological picture of the region has brought to the surface considerable evidence of the settlement dating back to the Roman period. In the St Demetrius area, ancient graves of historic times had also been identified. Travelers of the last century and modern scholars, on the findings of a Roman bath-house in the chapel of St. George,  find that this area had a coastal town and consider it to be ancient Mithimna.

The same view was supported in the 6th International Conference, prehistoric Aegean archaeologist and director of the 25th Archaeological department, filing evidence from excavations carried out in the region and the years 1990-1991. During the excavation, another 107 vessels had been found, all aota conical cups, except six bell-shaped (bell cups). South of the excavation another incision revealed 78 other vessels, same as the other section. Because of these findings, a third section was made a short distance away, that exposed another 80 pots, most aota conical. 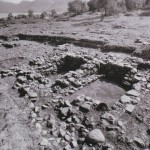 Finally, we have to mention that there are many testimonies of residents who had found archaeological findings in the area. For example marble columns, vessels and wall construction debris. However, to this day not much more evidence of ancient mithimna has been uncovered.